Washington, DC -- In an editorial board meeting with PennLive today, Pat Toomey reportedly said that he seeks a “middle ground” when it comes to abortion. What he forgot to mention is that for Pat Toomey, a “middle ground” means seeing Roe v. Wade overturned. Pat Toomey is one of the most extreme anti-abortion, anti-women’s health Senators in Congress. He voted 7 times to defund Planned Parenthood, including voting in favor of a government shutdown to defund the health care provider. He supports banning safe, legal abortion in Pennsylvania, and even jailing doctors who provide abortion. 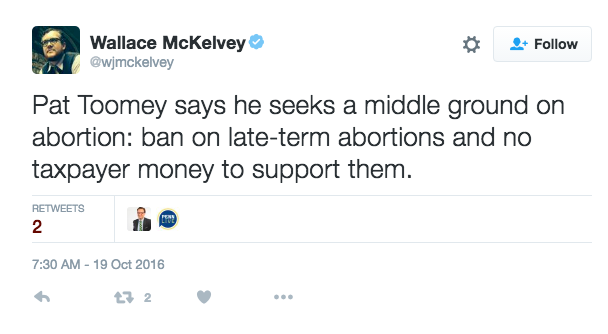 FACT: Pat Toomey does not seek a “middle ground” when it comes to abortion. He is one of the most extreme anti-abortion Senators in Congress.