The ad campaign focuses on what’s at stake for women in this election, and how Secretary Clinton’s lifelong work protecting and expanding reproductive health and rights make her the best candidate for president. The video “Champion” details how Hillary Clinton has stood with women against extreme attacks on reproductive health care. And “Care that Drives” highlights how Hillary Clinton understands what is most important to women –– and how she has spent her career fighting for them.

“Hillary Clinton is the only candidate in this race who has made women’s health and rights a priority. Hillary Clinton has been fighting for women and their families for her entire life.

“Politicians in Virginia, Texas and Michigan have been stripping women and families of their basic health and rights. Women in these three states know how important it is to elect a champion who will fight for women. That’s why so many women are standing up in support of Hillary. They know what’s at stake, and they know she’ll fight for us.” 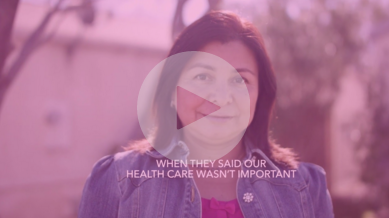 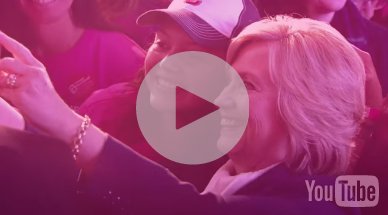 This March Primary ad campaign follows six-figure digital ad buys in both Iowa and Nevada that included broadcast, cable and digital ads, as well as mailers, phone banking, and canvassing.

Secretary Clinton has spent her entire career fighting to expand access to birth control so that everyone — regardless of where you come from or how much money you make — has the care they need. As Senator, Hillary Clinton introduced 8 pieces of legislation with the clear purpose of expanding and protecting women’s access to reproductive health care — when others in Congress were intent on blocking it. And she has stood by and fought for the millions of women, men, and young people who rely on Planned Parenthood for care.

Planned Parenthood Action Fund endorsed Hillary Clinton in front of a crowd of 500 in New Hampshire on January 10. Planned Parenthood political and advocacy organizations plan to spend an unprecedented $20 million in this election cycle, with a focus on the presidential race, as well as key Senate races in New Hampshire, Nevada, Wisconsin, Pennsylvania and Ohio to make sure voters know where the candidates stand on these issues and how candidates’ positions will impact them.

The Planned Parenthood Action Fund endorsement decision followed a robust, months-long process. All three Democratic candidates were interviewed by a panel made up of supporters — patient advocates, medical professionals, activists, volunteers and Action Fund members. The endorsement was then evaluated and voted on by more than 100 representatives from across all 50 states.

Women’s health was a deciding issue in the 2012 presidential election. Romney took a hard stance on Planned Parenthood and reproductive health care in 2012, and he then lost the election by the biggest gender gap in recent history. In Virginia in 2013, women’s health was a deciding factor when Terry McAuliffe won women overall — and won 59% of the votes of people who said abortion was the most important issue to them, a total of 20% of the electorate.

When they said our health care wasn’t important.

When they tried to deny us cancer screenings.

When they talked about our personal health decisions in ways meant to shame us.

She spoke up. She was our champion.

“They don’t mind having big government interfere with a woman’s right to choose and to try to take down Planned Parenthood. They are fine with big government when it comes to that. I’m sick of it!”

Planned Parenthood Votes is responsible for this advertising. We’re with Hillary because she’s with us.

All to make sure your family succeeds.

To make sure they could see a doctor.

And when Congress threatened to block patients from Planned Parenthood’s basic services, Hillary Clinton stood up for cancer screenings and birth control.

Planned Parenthood Votes is responsible for the content of this advertising.

We’re with her because she’s with us.